Gen-la Kelsang Dekyong is the General Spiritual Director of NKT-IKBU and the Resident Teacher at Manjushri KMC, the mother center of the NKT.

She has been a student of Venerable Geshe Kelsang Gyatso Rinpoche for over thirty years, sincerely training under his guidance in all aspects of Kadam Dharma. She is recognised as a fully qualified Dharma Teacher of both Sutra and Tantra.

Gen-la teaches at major Kadampa events around the world, and over the years has touched the hearts of thousands of people, whom she has inspired to integrate Buddha’s teachings into their modern daily lives.

During my life I shall have laid only the basic foundations, but later generations need to develop these more and more until the New Kadampa Tradition flourishes in every single country of the world – Geshe Kelsang Gyatso 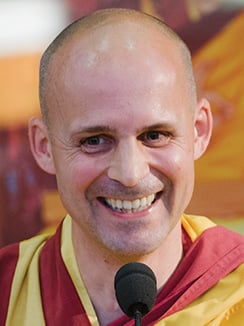 Gen-la Kelsang Jampa is the Deputy Spiritual Director of NKT-IKBU and the Resident Teacher at KMC Texas.

He has studied under Venerable Geshe Kelsang Gyatso Rinpoche and taught internationally for many years and is greatly admired for his warm personality and clear, inspiring teachings.

Kadam Morten Clausen is the Eastern US National Spiritual Director of the New Kadampa Tradition and Resident Teacher at the Kadampa Meditation Center New York City, and also Bodh Gaya Center in Bayside, Queens. For over 30 years he has been a close disciple of Venerable Geshe Kelsang Gyatso, who gave him the title “Kadam,” indicating that he is a senior lay teacher of the Kadampa Tradition.